Smart home is the application of computer, network, communication, control and wiring technology to the home, connecting various devices in the home through the network, and using convenient means such as wireless remote control, telephone or voice to make the user more convenient. The control of home equipment fully reflects the people-oriented philosophy of life. The home network is to connect all the household appliances to a network, which is the core of the smart home. It controls and adjusts each device according to a certain communication protocol. The control of the home network can be divided into wired control and wireless control. The wireless control is mainly outside the home range, and the electrical equipment in the house is controlled by wireless devices such as telephones, and the wired control is used to control the electrical equipment in the residential area. Among many wired control technologies, power carrier technology is widely used. The power carrier technology transmits control signals to various electrical devices through the power line, so that the control terminal and the home appliance facilities form a home network. The power carrier is divided into a high voltage carrier and a low voltage carrier. The high voltage carrier is used for remote control and regulation, and the low voltage carrier is mainly used in the home because of its relatively short transmission distance. The power carrier technology utilizes the power line as the transmission medium for controlling the electrical appliance, without rewiring, reducing the cost of the smart home and facilitating updating and maintenance. Through the research of X-10 protocol, this paper realizes the network application of power carrier technology in smart home control.

The power carrier communication transmits control signals on the power transmission line with a power frequency of 50 Hz, and centrally controls each control node with an open network structure. The communication protocols currently applied to the power carrier include BACnet (Building AutomaTIonand Control Network), EBI (European InstallingBus), HBS (HomeBusSystem), and X-10 protocol. The X-10 signal frequency is 120 kHz, which is higher than the AC signal frequency. More, so the receiver is easy to recognize. The intelligent home design based on X-10 protocol adopts power line carrier communication technology, and uses 220V power line as the transmission medium of signal. In smart home, X-10 protocol is also the mainstream network communication protocol.

The X-10 is an internationally versatile smart home power carrier protocol. The X-10 can communicate between devices via power lines and transmit control commands to the device. In 1976, PicoElectronics of the United Kingdom proposed a power home control program, and the company's engineers developed the X-10 agreement and obtained a patent. After the introduction of the X-10 module into the United States, it has not only been greatly improved in technology, but also began to be used in the field of smart home. Since then, a large number of smart home manufacturers have appeared in the world, and major electrical companies such as Siemens and Samsung have also devoted themselves to the field of smart homes.

The X-10 communicates by sending and receiving signals on the power line. Therefore, the X-10 system consists mainly of two parts, the transmitter and the receiver. The control signal is transmitted by the transmitter to the receiver through the power line, and the electrical device is controlled by the receiver. The signal of X-10 is superimposed on the zero-crossing point of the AC power line. Since the interference is smaller as the pulse signal is closer to zero, the encoded signal of 120 kHz is loaded onto the 60 Hz power line, and the transmission is indicated according to whether there is a carrier signal at this time. "0" and "1" of the data. 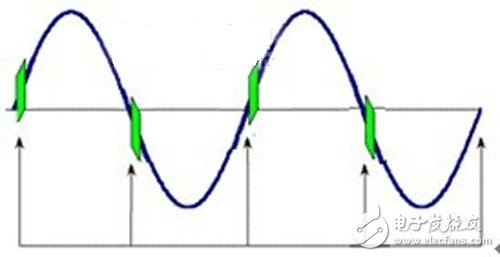 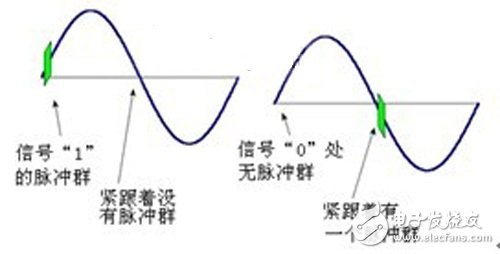 In order for the receiver to know when to start receiving data from the transmitter, a start point needs to be set, and when the receiver detects the start signal, it begins to receive data. There are bursts at successive three zero crossings, and the next zero crossing has no bursts, indicating that the start point is generated, as shown in Figure 3. 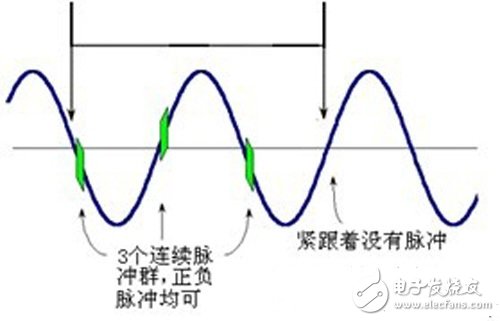 In order for the line transfer device to not miss any transmission information, the X-10 transmits each data frame twice. A complete control command consists of 4 frames of data. The first two frames transmit the address of the controlled device, and there is no gap between the two frames. The last two frames transmit control commands, and there is no interval between the two frames, but there are three cycle intervals between the first two frames and the last two pins, so each control instruction requires 47 cycles. For a 50 Hz power line, 47 instruction cycles are close to 1 second.

X-10 is an internationally-used smart home power carrier protocol. If there is no common communication protocol between the two parties, the communication cannot be performed synchronously, or because the data format is inconsistent, each other cannot understand the information contained in the other party's data. Communication is still not practical. The X-10 power carrier can transmit control commands like a network cable while providing current, thereby achieving networked control.

The smart home system based on the X-10 protocol is mainly composed of a home gateway and X-10-compliant home appliances distributed throughout the home. Since most home appliances on the market still do not provide support for the X-10 protocol within them. Therefore, it is necessary to temporarily add an X-10 module between the power line and the home appliance power supply, and the gateway controls the X-10 module to indirectly control the home appliance. In order to identify different devices in the network, a 2-digit hexadecimal code is called, which is called an address code, so that all controlled devices in the system are given a unique address code.

Each X-10 device is assigned an address consisting of a "room number" and a "device number". The selection range of the room number is the letter "AP", and the selection range of the device number is the number "1-16". Therefore, in a smart home system based on the X-10 protocol, up to 16 & TImes; 16 = 256 X-10 devices with different addresses can be controlled at the same time, so the system can accommodate 256 different addresses, and the executable instructions include: On, off, dim, bright, alllightson, allunitsoff. The X-10 protocol specification encodes the device address for logical representation. It can be used directly by referring to the conversion table in the protocol.