A report from Bell Labs predicts that cellular traffic generated by Internet of Things (IoT) devices will account for only 2% of overall traffic by 2020, and a real large increase will be supported. This is only possible when the video sensor and camera start to occupy the mainstream position.

Bell Labs, a long-established company now owned by Nokia, has always been concerned about â€œbig issuesâ€; the first report of the newly formed advisory group (ConsulTIng group) of the lab, the topic is to explore how Building a future mobile network and how operators can profit from the 2020 network traffic demand.

The three key issues that the Bell Labs report focuses on are:

Â· What are the potential needs for today's new services? And by 2020, how much growth will these needs grow globally and across regional markets?

â€¢ How much of those needs can be met through an unlicensed spectrum solution? And how can mobile network operators benefit from the rest of the service, including high mobility, long distance, and high performance?

Â· How should the network change? How can new technologies and architectures help overcome key challenges?

One of the main conclusions of the above problem is that with the current technology development speed and based on the current economic situation, only 81% of global demand can be met by Wi-Fi and cellular networks (while Wi-Fi occupies three points). The ratio of the second). An important message is that mobile network operators urgently need to accelerate investment to counter such a huge gap. 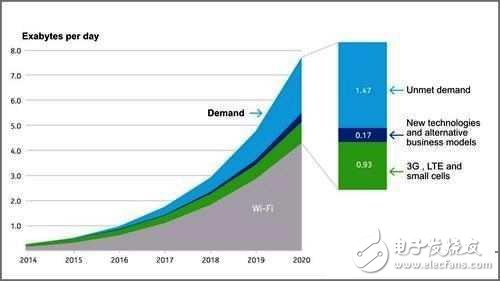 Perhaps this of course means self-promotion, but this is an immediate warning from Nokia and its infrastructure supplier competitors. The Bell Labs Advisory Group emphasized that the report is based on their research on people's desire for digital content and services, not simply inferring future mobile network traffic trends.

The report concludes that only by 3G, 4G (LTE) technology and small cells, operators can't profitably respond to network needs that cannot be covered by Wi-Fi and other technologies. .

The report emphasizes that the cost of any such transformation must be resolved by case-by-case, mainly because any change will still depend heavily on existing network infrastructure status, labor costs, and access rights. And regulatory restrictions, and don't forget, there are operational support systems that support existing and future networks. This case assessment is exactly what Bell Labs' advisory team is preparing to work with operators around the world.

The Internet of Things brings unknowns to mobile networks

Not surprisingly, Bell Labs reports that the Internet of Things will become an â€œemerging unknownâ€ in the Internet equation; the authors say that the number of IoT networking devices will be 1.6 billion in 2014, by 2020 Increased to between 20 billion and 46 billion units.

However, despite the huge expected adoption rate of IoT devices, the total amount of cellular traffic generated by such devices will only account for 2% of the total mobile network traffic by 2020; the actual increase will be limited to support video. Testers and cameras are in the mainstream. In fact, the report points out that audio/video streaming will be the â€œbiggest contributorâ€ to network traffic in the short term and is estimated to account for 79% of total traffic by 2020.

The Bell Labs report also warns that operators need to handle the sporadic transmissions generated by billions of billions of connected devices in response to the massive increase in control plane capacity.

Of course, IoT traffic will generate a lot of signaling traffic relative to data traffic; for example, a typical IoT device may require 2,500 transactions or links, but consume only 1 MB of data, but The amount of data of the same size may be consumed as long as a single action video link.

According to the report, under this destructive view, the daily network connection from the cellular IoT device will grow 16 to 135 times by 2020, which is three times the number of connections generated by humans. Marcus Weldon, president and chief technology officer of Nokia Bell Labs, believes that there is an urgent need for the industry to engage in a critical dialogue about the future of the Internet and how to build them.

He pointed out that the next phase of human evolution will involve "automation of life," and that the world will create billions of interconnected items, including smart devices, cameras, robots, sensors, and instant video and data streams. Exchangeâ€”not just about people, but also cloud systems that extract knowledge from those sources and perform tasks to make our work and daily life more convenient and smarter.

Weldon said: "This new era of digitalization will create a major shift in demand, challenging mobile operators to achieve maximum performance at the lowest cost per bit, while supporting rich personalization."