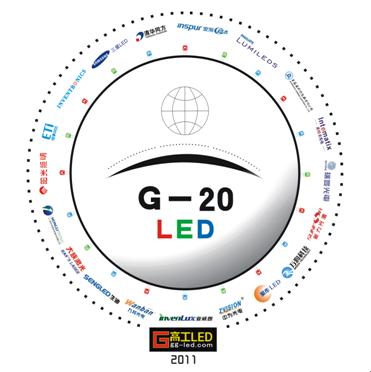 Working together to promote growth and cooperation for mutual benefit

1. The G20-LED member company leaders held the second meeting of the first G20-LED Summit in Shenzhen Qingqing World on December 8, 2011.

2. Since the G20-LED first meeting in Shanghai, the LED industry is constantly facing serious challenges from both inside and outside.

Since the beginning of this year, due to the debt crisis in Europe and the United States and the global economic downturn, the export orders of LED display and lighting enterprises with some unsound technological advantages in China have been affected to some extent;

In the midstream packaging industry, on the one hand, the price of raw materials such as upstream chips has dropped rapidly, and on the other hand, the downstream lighting application market has not experienced the pressure of expected explosive growth. Some low-end packaging companies that do not have the advantage are forced to cut prices to maintain their operations. At the same time, mid-to-high-end packaging companies are faced with huge opportunities for technological innovation and resource integration to expand production capacity and seize the market.

The downstream lighting application market, due to the lack of reasonable market access mechanism and mandatory national standards, resulting in uneven product quality, affecting the trust of owners and end consumers in LED lighting.

The leaders of G20-LED member companies agreed that the current stage of industry downturn is only a stage that must be experienced in industrial development. At the same time, the industry is also facing tremendous opportunities for development and opportunities.

According to the statistics of the High-tech LED Industry Research Institute (GLII), the output value of China's LED industry is expected to reach 154 billion yuan in 2011, a year-on-year increase of 22%, while output increased by more than 50%. GLII expects that in 2012, driven by the domestic lighting terminal market demand, the industry's output value is expected to exceed 200 billion yuan, achieving a year-on-year increase of 30%.

There are indications that the LED industry is undergoing an unprecedented period of resource integration. The industry is returning to rationality and normality.

3. Today, we want to reaffirm the commitment of the G20-LED Summit members to cooperate with each other. The leaders of the enterprises have decided to promote a series of innovative cooperation initiatives within the framework of the G20-LED Summit, and jointly to the government's superior authorities and have a sense of industrial responsibility. The leaders of the company issued an initiative to regain confidence in industrial development, with a view to contributing to the healthy and sustainable development of the LED industry in China and the world.

4. Here, we agree to sign the â€œG20-LED Summitâ€¢Shenzhen Gazetteâ€ to strengthen information communication between the middle and lower reaches of the industrial chain through a series of cooperation plans among member companies, and set a benchmark for other industrial enterprises.

5. All members of the G20-LED Summit decided to jointly launch the G20-LED Product Specification Working Group.

The purpose is to let more outstanding companies understand and participate in the development of the rules of the global LED industry development. G20-LED members cover the upstream and downstream of the domestic and international industrial chain, and are among the most influential enterprises in the industry. We decided to work together and are committed to participating in and formulating international standards and product market specifications that are in line with LED internationalization and industrialization. .

At the same time, the G20-LED Product Specification Working Group will aim to improve the product quality of participating companies, and attach relevant labels (such as product packaging) to products that comply with the G20-LED product specifications, thereby providing high coverage for global end consumers. The promise of quality guaranteed LED lighting products.

First, the formulation of product specification system, improvement and update should be closely integrated with industry and market changes, avoiding emptiness. At the same time, the specification will be appropriately adjusted and updated according to the introduction of relevant national standards, and the requirements of various parameters should be higher than the national standards;

Second, the application and promotion of the standard is the most important thing. Any product that is labeled with G20-LED must comply with the requirements of the specification and be uniformly passed the sampling test of the third-party authoritative testing organization;

Third, the G20-LED product specification must have the advanced and commonality of the industry.

Fourth, the development of G20-LED product specifications needs to be in line with international standards, emphasizing fairness, openness and compatibility among member companies.

We unanimously believe that the G20-LED lighting specification working group needs to speed up the process of introducing specifications to the market, and at the same time formulate a unified standard for relevant testing, so that the specification has practical operability, thereby accelerating the promotion of standardized marketing.

7. We unanimously agreed that the G20-LED Product Specification Working Group adopts a group responsibility system, and each group is independently responsible for the specification development of an LED lighting product. Among them, each group has a team leader, and member companies arbitrarily choose to participate in each group and become one of the team members.

Each team leader shall submit a list of the members of the team to the G20-LED Product Specification Working Group Secretariat within 7 working days from the date of publication of the bulletin, the work schedule and the timeline for the development of the specification.

By analyzing the number of approved patent applications, the statistics of various countries, companies, inventors, patents cited, and technology life cycle, the statistical analysis information is compiled into charts for the members of the working group to share.

9. The G20-LED Summit member companies will set up upper, middle and lower reaches working groups respectively, with the aim of conducting dialogues and exchanges between peers, exploring and jointly promoting market regulation and coordinating market conflicts among members.

Here, in order to help the LED industry to emerge at a low point and jointly maintain and promote the LED industry towards a healthy and sustainable development, we will jointly issue the following initiatives for relevant government authorities, industry colleagues, investors and end-market consumers:

11. We reiterate that all actions initiated by members of the G20-LED Summit are limited to the voluntary actions of member companies. We hope that this form of cooperation can help set an example for the industry and actively communicate with companies outside the members.

12. We agreed to actively implement the cooperation plans and initiatives identified in this meeting before the third meeting of the G20-LED Summit next year, and continue to take measures to further strengthen the cooperation between the middle and lower reaches of the industry chain.

"G20-LED Summit" (G20 LED Summit) is a high-end roundtable conference of LED industry, which is initiated by the world-renowned industry research and media organization - Gaogong LED, and is composed of market-leading companies in various segments of the global LED industry.

The 1st meeting of the first "G20-LED Summit" was successfully held on August 29, 2011 at the Shanghai International Convention Center. The summit formed a number of action initiatives and released the "Shanghai Communique of the First Meeting of the G20-LED Summit." Through a series of specific measures, it is also an unprecedented spontaneous and unified action in the industry to promote the standardized and orderly competition of the LED industry, and to continue to develop healthily.

G20-LED Summit member companies: (The following rankings are in no particular order)