On March 16, 2011, ST Ganhua (000576) issued the â€œPrompt Announcement on the Signing of the Share Transfer Agreement by the Controlling Shareholder Jiangmen City Assets Administrationâ€. 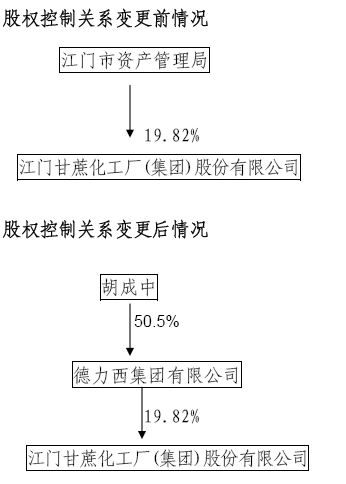 The government restricts Delixi through a supplementary agreement

According to the supplementary agreement signed by the two parties, ST Ganhua or Delixi Group will invest no less than 60 MOCVD equipment in Jiangmen City within the next 5 years after the completion of ST Ganhua's state-owned shares transfer, with a total investment of not less than 1.5 billion yuan. If ST Ganhua Investment is less than 1.5 billion yuan, the investment amount will be supplemented by ST Ganhua or Delixi Group. The first 100 MOCVD equipment directly invested by ST Ganhua must be settled in Jiangmen City.

Indreci Group invested in Shanghai Boenshitong Optoelectronics Co., Ltd. (professional production of epitaxial wafers and chips) in 2009 by way of shareholding (20% shareholding). The MOCVD production equipment purchased by the company has been installed and put into use, and has entered the stage of small batch production.

In order to avoid the existence of horizontal competition between Shanghai Born WorldCom and ST Ganhua, which was previously invested by Delixi Group, the agreement also stipulates that within two years after the completion of ST Ganhuaâ€™s state-owned shares transfer (subject to the requirements of the regulatory authorities) ), the opportunity to integrate the LED epitaxial wafer business and related assets invested and constructed by Delixi Group and its actual controllers into ST Ganhua or transfer to independent third parties.

The subsidy has accumulated more than 1.1 billion yuan.

Since 2011, Jiangmen City has given ST Ganhua support funds of 20 million yuan at the end of each year, and has been supporting for 5 years and accumulated 100 million yuan. At the same time, according to Jiangmen City policy, it will give support to ST Ganneng's most favorable policies in other related land, real estate, taxation and financial support.

For the subsidy of MOCVD, Jiangmen City Government promised to give ST Ganhua a subsidy of financial subsidies no less than the â€œProvisional Measures for Accelerating the Construction of Strategic Emerging Industries in Guangdong Province (Jiangmen Green Energy) Baseâ€ (Jiangfu [2010] No. 15) The maximum amount of subsidy required.

The first phase of the project is equipped with 20 MOCVDs and will be produced in 2013.

According to the â€œFeasibility Analysis Report on the Use of Non-public Issuance of RMB Common Equity Raised Funds in 2011â€ announced by ST Ganhua earlier, the total net proceeds raised this time was approximately RMB 790 million. The fundraising plan is used for two projects: (1) LED epitaxial wafer production project; (2) yeast bioengineering technical transformation and expansion project. Among them, the LED epitaxial wafer production project plans a total investment of 700 million yuan, using the raised funds to invest 600,000 yuan.

The 20 LED epitaxial wafer production equipments that the company intends to invest are all based on imported MOCVD 55-chip machines. The current market price is about USD 3 million per unit. After the project is completed and put into production, it is estimated that the annual output of high-brightness blue-green LED epitaxial wafers will be 960,000 pieces. The annual operating income will reach 960 million yuan, the annual net profit will reach 130 million yuan, and the internal rate of return on investment will be 17.35%. The investment recovery period is 6.33 years.