Solar (PV) inverters convert the DC voltage generated by solar panels into AC voltage for use in public grids and commercial appliances. The optocoupler is an important part of this process because it prevents high voltages and transient voltages due to component damage or transmission distortion during the conversion process. This article will explore design techniques to improve the optocoupler power buffer to make it less susceptible to noise interference.

Solar panels typically produce high voltage DC output during the conversion of sunlight into energy. Converting the DC output to a high-voltage AC output minimizes line losses and allows the output power to be transmitted over long distances, either to the utility grid or to the building's internal grid where solar panels are installed. DC-to-AC (DC-AC) conversion is performed by a subsystem called a solar inverter, which can be designed as a single solar panel or as a central unit for converting solar panel arrays.

If the solar inverter is installed in a single solar panel, this is called a micro-inverter (Figure 1), which is a smaller solution for residential and general buildings where the power of the solar panels can be used directly in the building. The internal network of the object and commercial appliances. In this case, the inverter usually has a working power of less than 300 watts (W).

When the solar inverter is used as a separate unit supporting several PV panels, it is called the Central Inverter (Figure 2). The block diagram is essentially the same as the micro inverter, but only one battery system. The energy of multiple solar panels can be stored and then delivered to the utility grid. The operating voltage of the central inverter is generally 1 kilowatt (kW) or more.

When the optocoupler is integrated into a module that drives DC-DC and DC-AC converters, as shown in Figures 1 and 2. In both types of solar inverters, optocouplers are an important part of the system, preventing high voltage and transient voltages at one end of the line from causing component damage or transmission distortion at the other end.

It can be used as an optocoupler for controlling the Power Buffer of a power MOSFET or IGBT gate. It provides a peak charging current for the gate of a power semiconductor in the form of a positive voltage (VOH), thereby turning on the device. The optocoupler pulls the gate of the drive device to zero voltage (VOL) or lower to turn off the gate.

Figure 3 is an internal block diagram of the optical coupler. Each part of the drive is powered by a common power supply or a bias supply. During startup, the complexity of the circuit causes a delay when the power is first turned on, which causes the gate output to increase with the VDD supply; it will continue to rise until the power supply is stable. Then, once the bias voltage is correct, the gate driver output returns to the correct state controlled by the light-emitting diode (LED).

Set the order in which the power is turned on to minimize the effects of waiting for the optocoupler bias supply to stabilize. Solar inverters typically have one power supply, one logic supply (3.3, 5 or 10V), an optocoupler supply, and a high voltage supply to power the MOSFET/IGBT. Turn on in order of power supply, first logic power, then optocoupler power, and finally MOSFET/IGBT power. As a result, it helps to offset the effects of a stable bias supply. This turn-on sequence also satisfies the logic-controlled Power-on Reset and the Boostrap charging time of the isolated driver power supply.

Common mode rejection is a measure of noise

High-frequency transients are a type of noise that can damage the data transmission of the optocoupler's isolation barrier. The CMR is a measure of the ability of an optocoupler to withstand transient noise. CMR is one of the most important indicators to measure the performance of optocouplers. Other indicators include isolation level and working voltage.

Therefore, the gate driver optocoupler solution provides more insulation safety buffers, while the capacitive or inductive solution has an insulation distance of less than 0.1 mm. This improves safety and reduces noise coupling. This device uses coplanar optical coupling technology to block interference caused by electronic noise generated by load switching. There is also a special electro-optical mask that reduces the chance of capacitive coupling between switching transients and the active circuitry of the optocoupler.

A typical 240V AC power converter produces an 800V switching transient and a rotation rate greater than 6kV/Î¼s. This large transient causes a 3mA peak current to flow between the input and output (for CIOs with only 0.5 picofarads (pF) of isolation devices). Figure 4 shows an example where a capacitor couples the noise current between the input and output of the coupler. 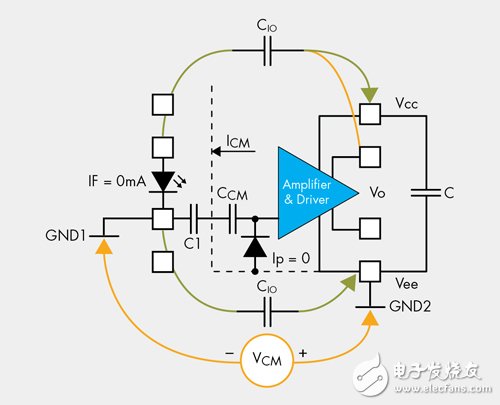 Common mode transients have a negative voltage swing, the same as the coupler's output ground (GND2) reference; this transient pulls the output of the coupler to the output; the Package Capacitance is the CIO that provides the input and output. The main coupling impedance; when the LED is off, the output of the gate is low; if there is ample common mode current iCM drawn from the input to the optical amplifier, the amplifier will turn on.

The noise current iCM is extremely small because there is a special common mode mask that blocks the effects of electronic mask variations that minimize the coupling into or out of the optical amplifier, limiting the effective common-mode coupling capacitance to less than 50pF . In this way, the optocoupler can easily suppress positive or negative common mode transients with a maximum amplitude of 1.5kV and a rotation rate of more than 15kV/Î¼s.

Common-mode transient suppression is especially important in half-bridge topology configurations because switching transients during normal current operation may cause the closed gate drive to turn on. The shunt LED can be used to increase the current-resistance transient capability of the half-bridge configuration and maintain the load dv/dt coupling of the package capacitor at low impedance - for running LEDs or running BJT Or the on-state resistance of the logic gate. However, the disadvantage of this approach is that increasing the shunt LED drive will reduce efficiency because the circuit consumes power regardless of whether the LED is turned on or off. Figure 5 shows a sample configuration. 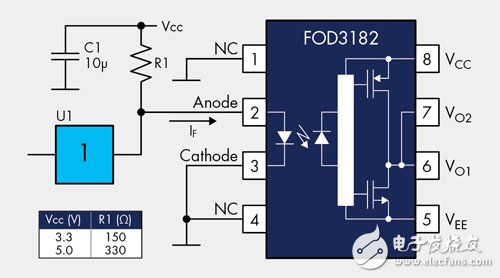 The LED is connected in parallel with the drive switch to form a current shunt drive. U1 is an open drain logic gate that acts as a driver. When the switch is off and U1 is high, LED current will pass. To turn off the LED, the gate must be forced low, which reduces the voltage across the LED to less than the desired forward voltage value. It also provides low impedance and reduces the effects of common mode conduction current on LED operation.

Understand the maximum switching frequency of the optocoupler

When using an optocoupler, it is useful to know the maximum switching frequency of the design. This calculation involves two basic steps. First, it must be determined that the optocoupler output driver MOSFET can diffuse at a maximum operating junction temperature of 125 Â° C and a room temperature of 100 Â° C. Maximum power. Second, determine the diffuse RMS power of the output transistor and the RDS(ON) voltage drop across the optocoupler transistor for the charge and discharge currents of a given MOSFET gate.

Solar inverters play an important role in generating and transmitting clean and sustainable energy. When performing DC-AC conversion, the high-voltage current must be carefully and effectively isolated, and the optocoupler is suitable for this power buffer. If you pay special attention to the startup requirements and use related technologies to improve the anti-interference ability, you can help optimize the performance of the optocoupler.

The gate-driven optocouplers described in this article are compatible with discrete power MOSFETs and IGBTs, so designers can unify the logic, isolation, and MOSFET sections of the power conversion circuitry. The solution converts milliwatts (mW) to kW while providing isolation between the primary and secondary circuits.